Ain’t no rest for the weary…and that’s because I lack self control and signed up for a lot of races in 2015.

Just two weeks after my epic NYC Marathon experience, it was time to hop on a plane again. For this latest adventure, I was headed to Oklahoma with Master Laura for the Route 66 Half Marathon in Tulsa. A pre-Thanksgiving trip with my buddy and a leisurely 13.1 mile “cooldown” run sounded like a fun little weekend to me. Ooh and a special 10th Anniversary Route 66 race medal and zip-up jacket? Yes please!

We rolled up to our cute little Airbnb house late Friday night. Our friendly host had texted instructions to look for the key underneath the table by the door. That sounded easy enough, so we set our sights on the two end tables on the front porch. The first table yielded nothing, so we looked under the other one…alas, only dusty bits and sticks. Hmm, maybe we should try looking under a potted plant for some reason? We lifted up and shoved around so many furnishings that it looked like we were ransacking the place late at night. And have you ever tried to drag metal furniture and ceramic pots across concrete discreetly? I’m sure we made a mighty fine impression on the neighbors.

Then I had a novel idea: perhaps I should read our host’s full instructions. Oh, we’re in the guest apartment down around the back of the house! And look, there’s a key here, just as the prophecy foretold. Success!

After settling into our adorable Grandma-esque digs — because when your key comes attached to an antique silver spoon with filigree, you know you’re in for some old lady chic — Master Laura and I made the short walk to downtown Tulsa the next morning.

As we explored, we wondered if we’d goofed up the race date or if Tulsa had been hit with a devastating plague, city-wide alien abduction, or a similar catastrophic event. Where did everyone go? No, really, where is everyone?! We’re in the middle of downtown, surrounded by various tourist attractions and historical districts, and 16,000 runners were scheduled to hit these same streets the next day. But yet…where was everyone hiding? There were maybe 4 people out and about, and restaurants and bars were similarly empty; it was bizarre. At last we located other living, breathing humans at the race expo, so that was most encouraging. Yes, they do exist! Onward to the race! 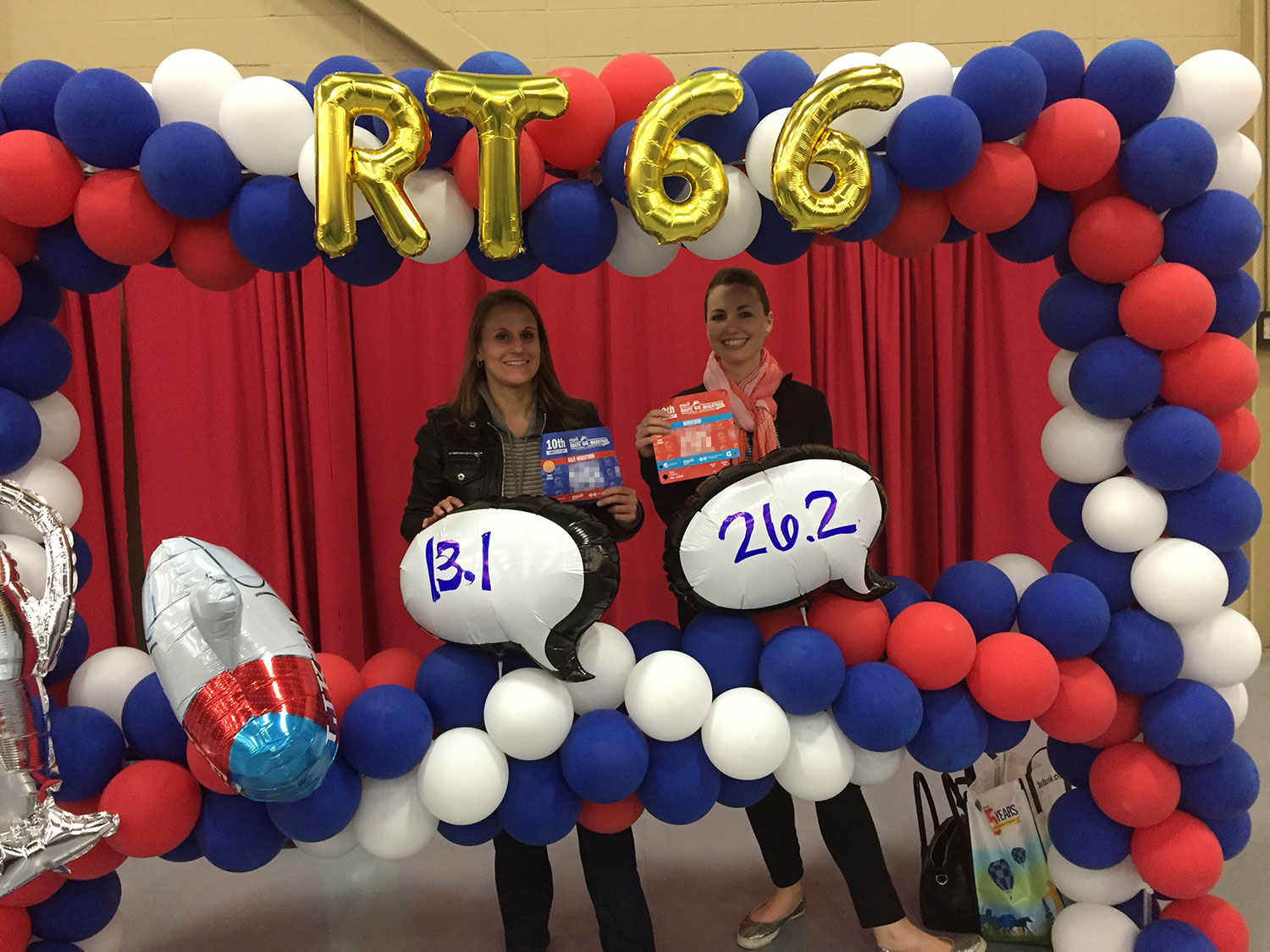 We walked to the starting area on Main Street in the heart of downtown on this chilly, blustery Fall morning. Though the “feels like” temperature rested in the low 20s, it was happily bright and sunny otherwise. And yes, there were people, lots of people, everywhere!

This shindig featured a confetti cannon at the start. Is there anything more wonderfully obnoxious and festive than thousands of colorful paper bits raining down upon you to start a race? Many runners were dressed equally as festive for the day, including one in a tuxedo and another in full 50’s diner waitress attire (sans roller skates, of course). This event also attracted loads of loyal Marathon Maniacs, which unfortunately meant that their creepy crazy-eyed mascots were everywhere. No, not the cute, deranged kitty mascot but the deranged, bug-eyed, bloodshot, frizzy-haired man and woman creatures.

See? I told you they’re weird. 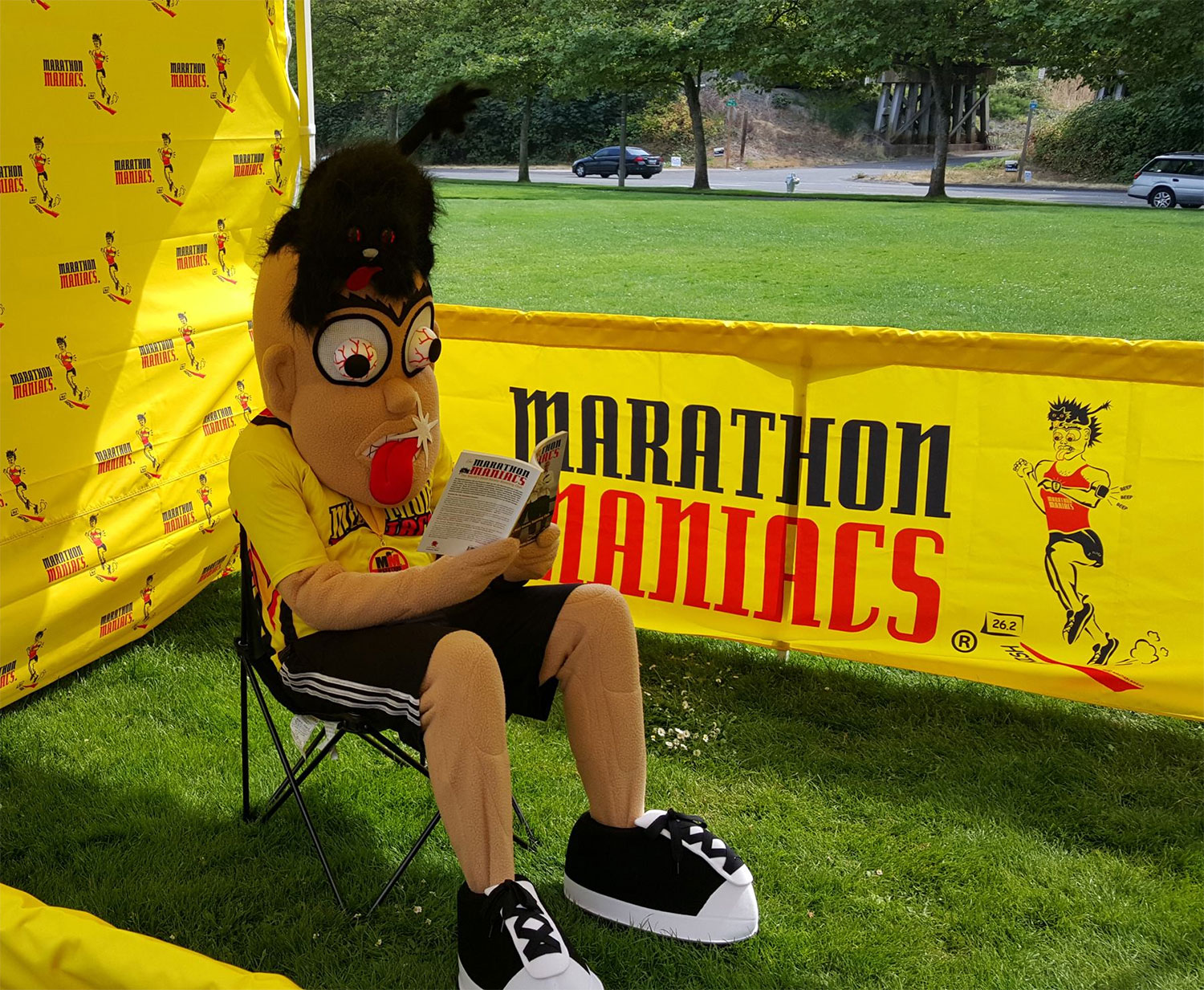 After the joyous confetti send-off, we made our way through some pretty neighborhoods all aglow with brilliant autumn colors. Lots of spectators (and pups!) were out to cheer us on. A couple miles later, we passed through the parking lot of a Hogwarts-looking private school. This lot seemed to have an excessive amount of speed bumps, but cheerful teen volunteers held numbered “SPEED BUMP” signs at each one to alert us. Hooray for safety!

The downtown was nicely scenic and had some rolling hills. We passed by some parks, an art museum, and some cute shops and restaurants. Past the midway point, we hit a 3-mile stretch along the Arkansas River, which gleamed in the sunlight. I passed the time by focusing on all the happy dogs spectating — corgis! weenie dogs! labs!) and the pretty scenery, because quite honestly, my head just wasn’t in the game. I still had some NYC Marathon hangover, and my legs and lungs were feeling “meh” to this whole running thing. But I was looking forward to running on the famous Route 66, even if just for a hot minute.

And just past mile 11, we were there! It was over so quickly, that if it hadn’t been for the giant, iconic Route 66 sign, I may have missed it entirely. I stopped for a quick picture, though I should’ve succumbed to the silly selfies that other runners were taking. 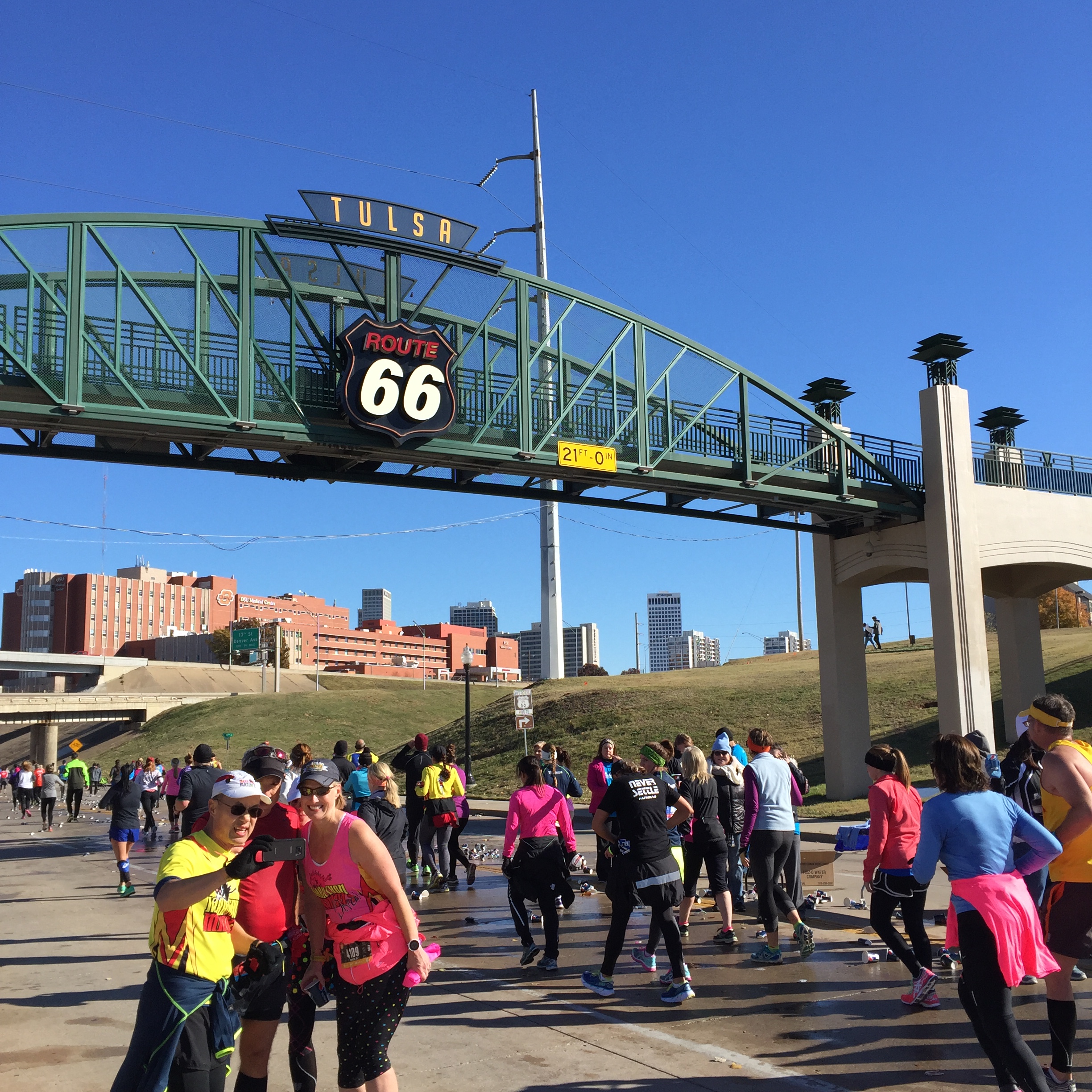 Just before the finish line, I saw a banner hanging on an overpass congratulating someone on her 50th state and marathon. I thought…one day I’ll be that cool and will be completing state #50! One day.

I rounded the corner and hit the home stretch. I held my arms up in triumph and was done — another state and runventure complete! I was excited to receive the cool 10th anniversary “Flying Lady” commemorative medal. Ooh and the center part spins! 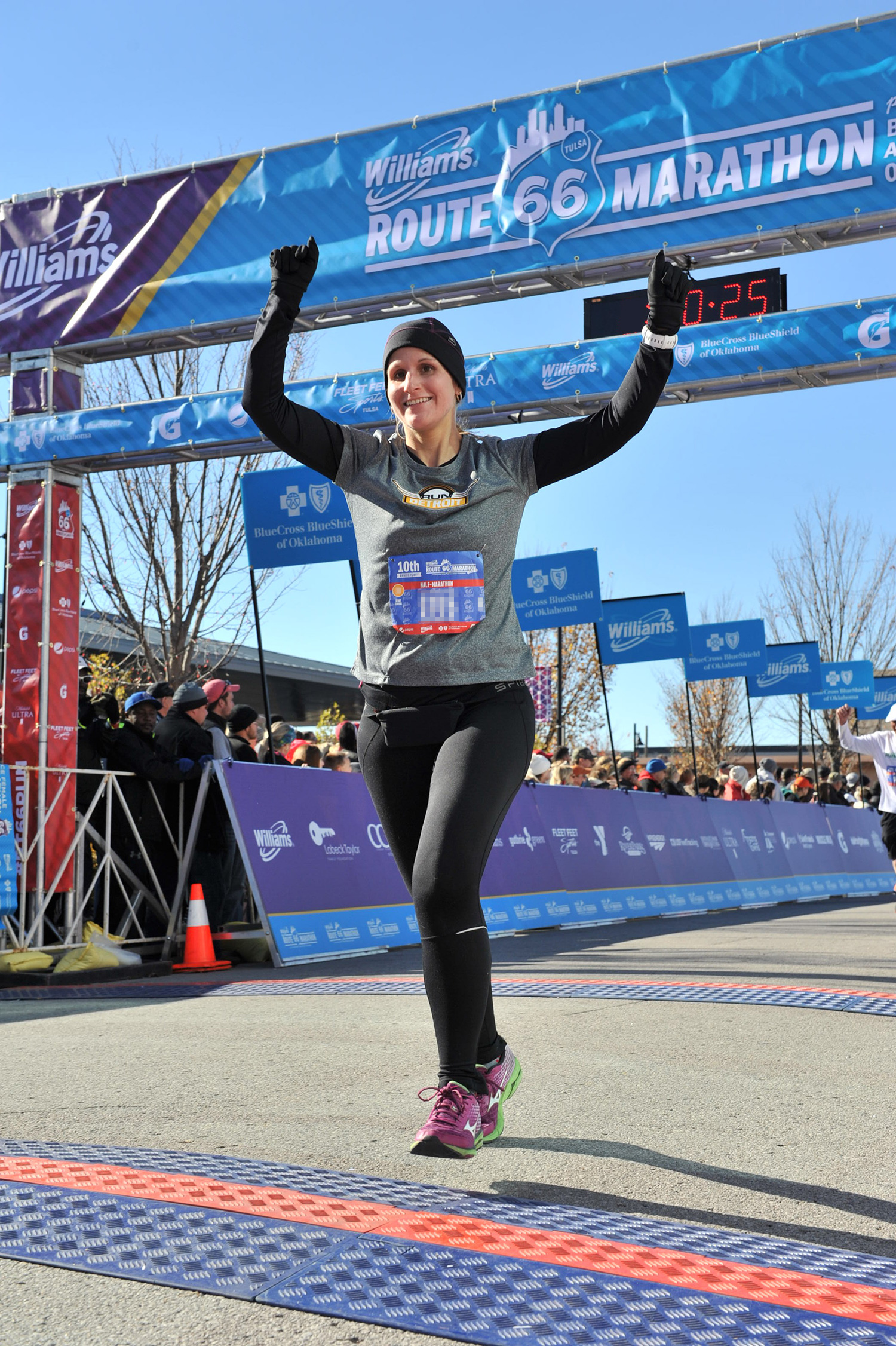 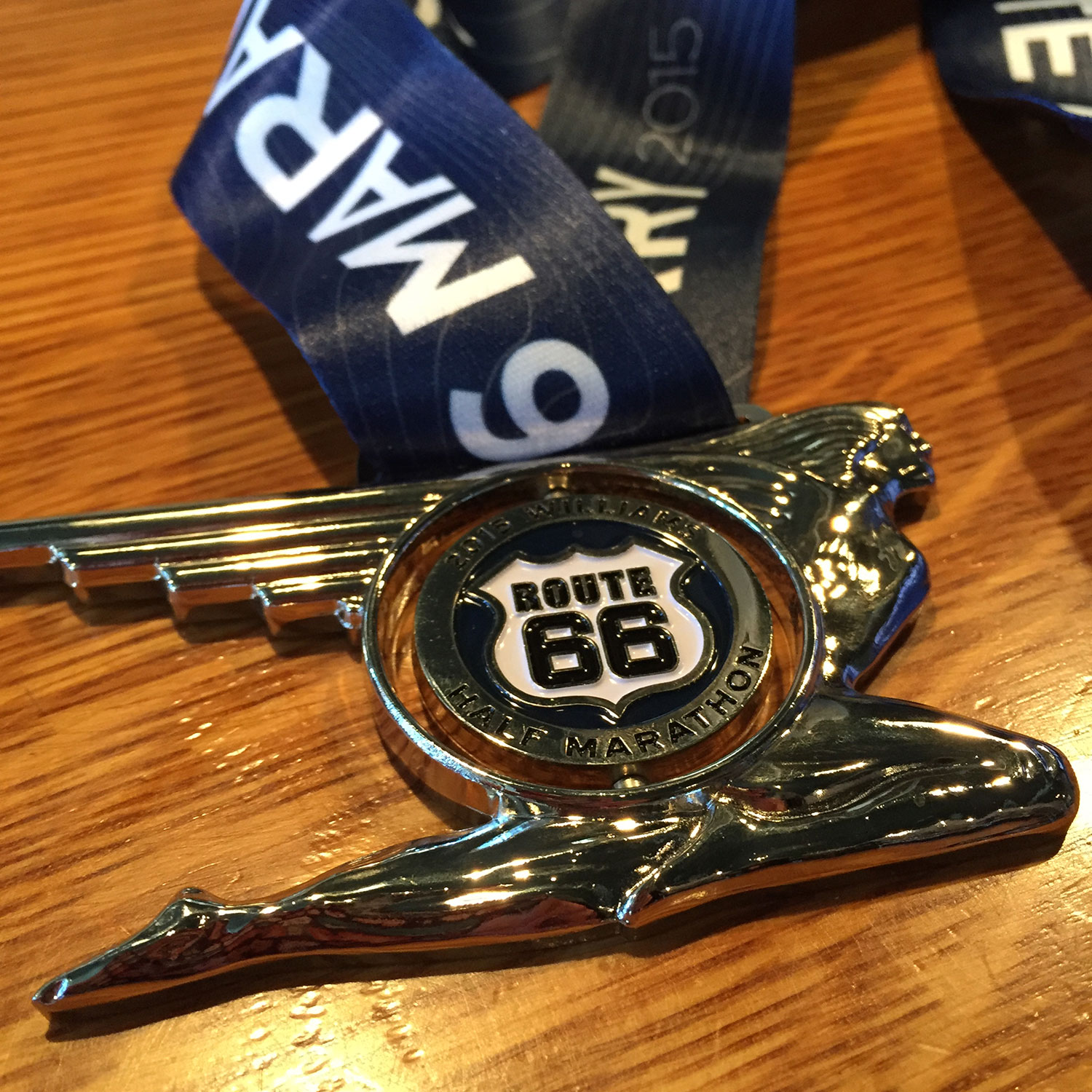 I grabbed my jacket, bundled up, and went to cheer on my friend. This race offered the “World’s Shortest Ultra,” a 0.3 mile detour that you’d get a unique finisher’s coin for completing. It was a short out-and-back route by the Center of the Universe landmark, so it was a great place to cheer your fellow runners twice. I holed up there to did some spectating, and eagerly awaited Master Laura. When I got a text from her that she’d finished the marathon, I couldn’t believe that I had missed her. But when I asked her about the detour, she said exhaustedly “Oh f— that! I didn’t do it.” Welp, I tried.

We celebrated that evening by doing a little bar-hopping. Our favorite spot of the evening was The Max Retropub, which was a cool 80’s-inspired, Billy Dee Williams-approved joint. We nerded out among all the nostalgic decor and became entranced by the retro commercials showing on their TVs. Once again, we wondered where the heck all the people in Tulsa were, though I must admit, it was nice not having to wait in line at any restaurant or bar. 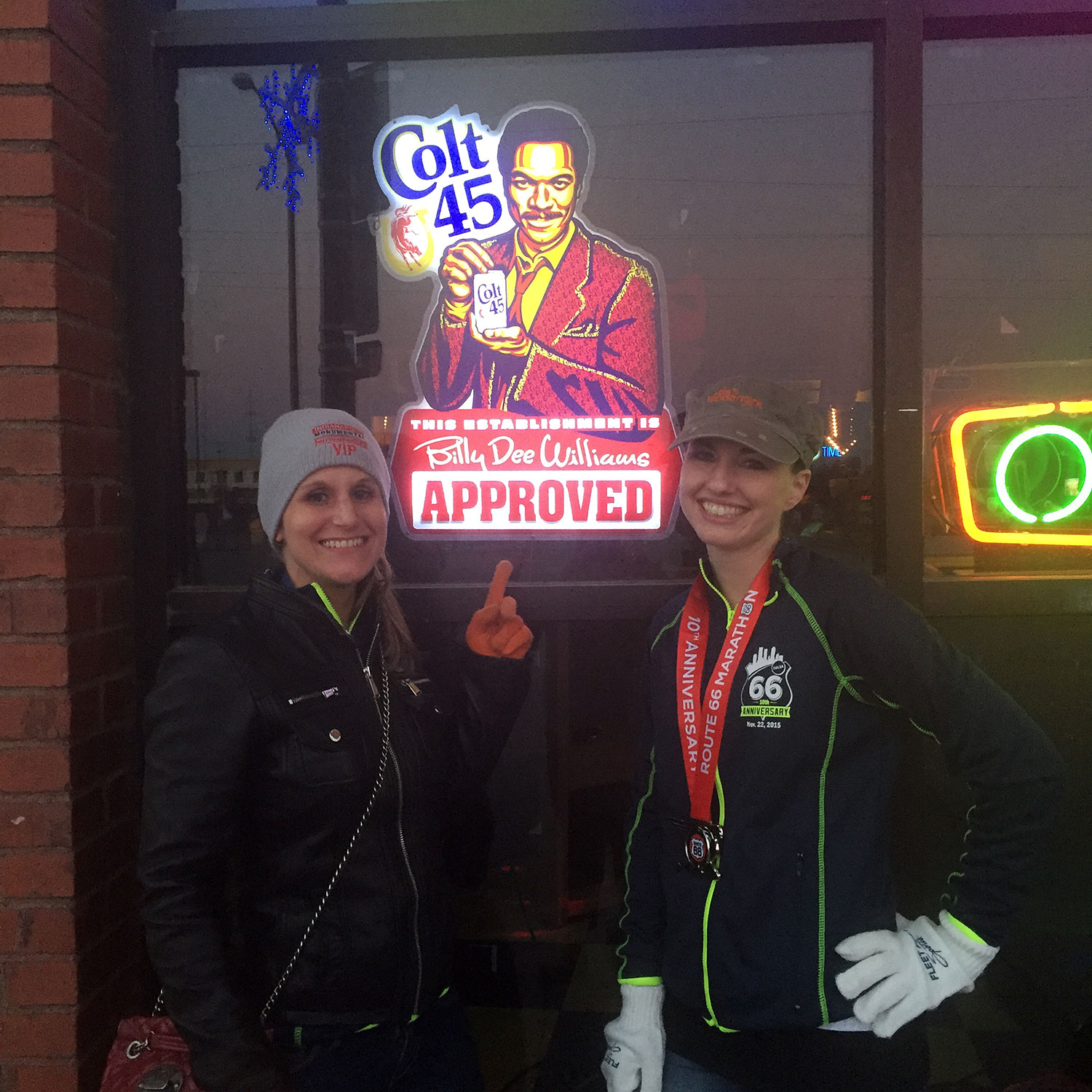 Overall, I’d say it was an OK race in an OK place! (Oh don’t act so surprised that I threw a lame pun in here, geez.) Nah, it was more than OK — it was a blast, just like a confetti cannon!