My mama once told me of a place
With waterfalls and unicorns flying
Where there was no suffering, no pain
Where there was laughter instead of dying
… Sal Tlay Ka Siti
Not just a story mama told
But a village in Ooh-Tah
Where the roofs are thatched with gold

Thanks to The Book of Mormon, this was the extent of my knowledge about Salt Lake City — er, Sal Tlay Ka Siti. My first visit to Ooh-Tah therefore had high expectations.

Laura and I flew into the city on Thursday for a long weekend to play and run the Salt Lake City Marathon and Half Marathon. Since she was staying with her college buddy, and my bestie Cara wasn’t due to arrive until the next day, I had some solo time to explore the downtown.

The first thing I noticed was how super sparkly clean the city was! Perfect landscaping and pristine streets greeted me while I wandered around aimlessly. Stunning mountain views and happy Spring sunshine didn’t hurt this sightseeing adventure, either. Eventually, I made my way to Temple Square and checked out its stately Salt Lake Temple. As a visitor to Mormon country, I felt strangely obligated to visit this mega tourist attraction. It’s a pretty impressive structure, so I returned for a nighttime view to see it all aglow: 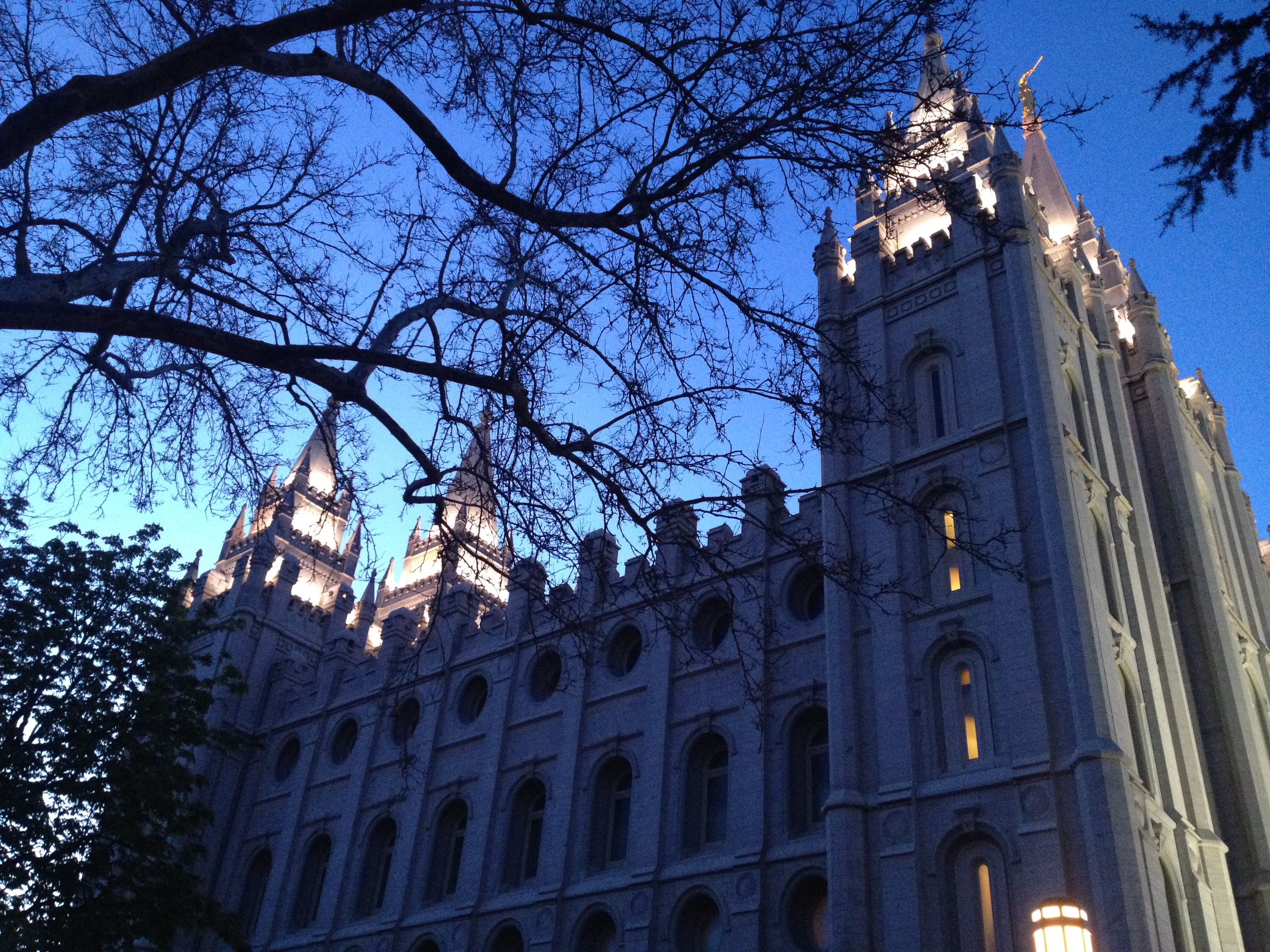 Cara rolled up the next day. After I hug-tackled her in the hotel parking lot, she told me about her ridiculous cycling mishap. While in scenic Moab the previous day, she went to get on her bike… but instead fell over onto a cactus, a super mean pointy-ass one at that. As she so eloquently stated, “Who the f— DOES that?!”

After we finally stopped giggling, we walked to the race expo at Energy Solution Arena, home of the Utah Jazz. Given the enormous arena, I expected an equally ginormous expo. How very unexpected that the exhibits and packet pickup took up just half the court. They could’ve had a basketball game going on, and we’d still have enough room to browse the expo offerings. I had hoped to get a race magnet for my collection, but alas, there were none to be found.

After a sushi dinner that evening, we jumped on the UTA train back to the hotel. Since we can’t ever have an adventure without weird shit happening, we witnessed an uncomfortably loud verbal dispute on the train. A disheveled lady kept growling at a man to “GO BACK AND F— YOUR MORMON WHORE!” Uhhh… This situation was smack in the middle of “This is incredibly awkward, yet kinda funny” and “Is this going to get violent and we need to get the hell outta here?” At the next stop, the guy sprinted out the door and down the street. She shouted after him, “RUN, BITCH, RUN!” presumably giving him encouragement for the race the next day.

Race morning brought perfect 50-degree weather and low winds. Cara and I hopped on the train to the half marathon start line with other enthusiastic, chatty racers. How appropriate for our athletic-feeling selves that we were headed to Olympic Legacy Bridge, the site of the ’02 Winter Olympic Athlete Village. The corrals were abuzz with excitement, and huge arches of red and yellow balloons made for a festive starting area. And you know, just some gorgeous snow-capped mountain scenery among us: 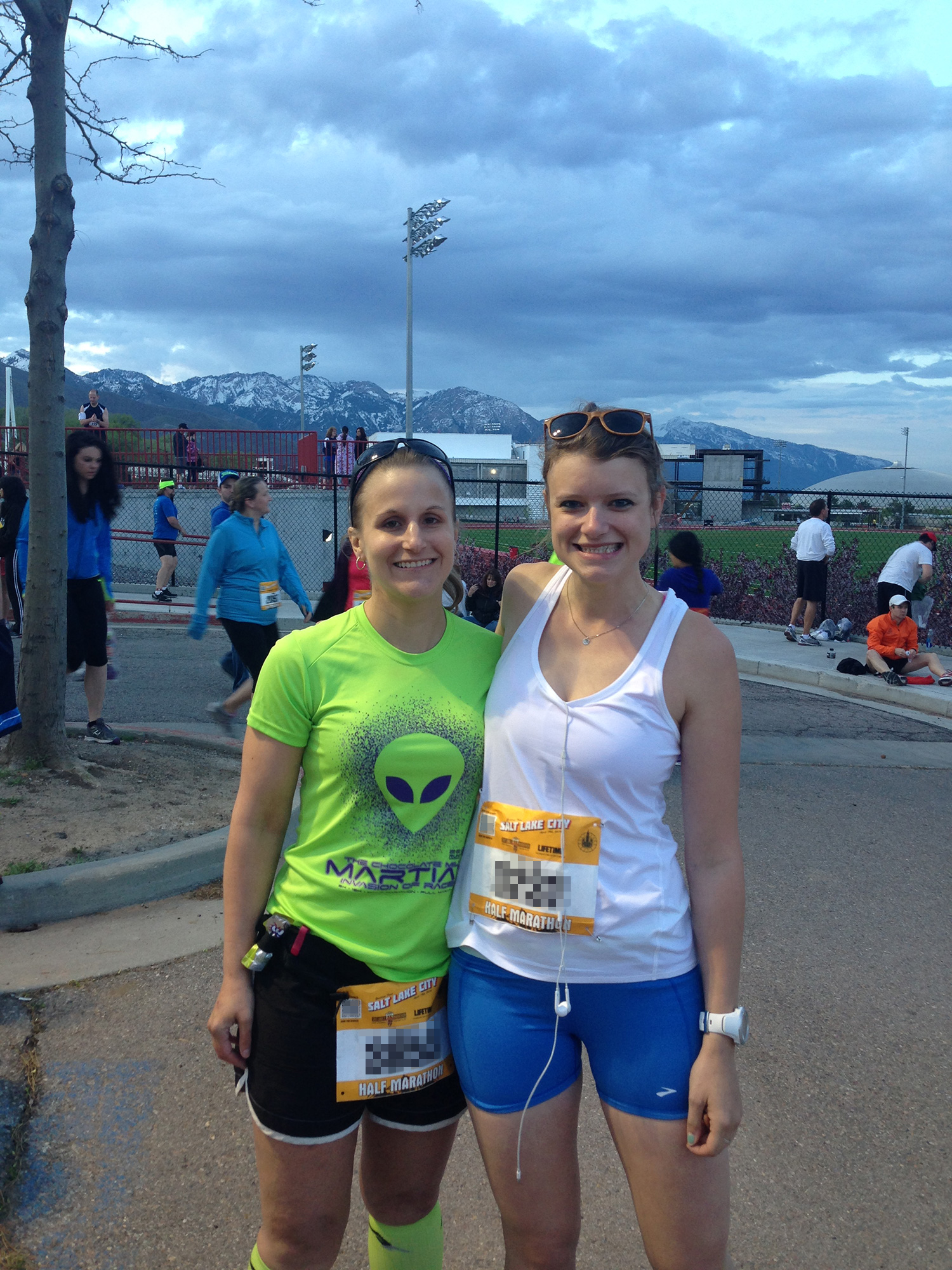 And then it begins! The first few miles were all downhill — sometimes of the steep, quad-thrashing variety — so it made you feel like you were flying at Kenyan warp speed. We made it to Memory Grove Park, a lovely little area with trees proudly showing off all their green buds for Spring.

We circled back towards downtown and crossed under Eagle Gate Monument near Temple Square. Okay, it’s really more of an arch than a gate, but I’ll let that slide since it’s historical and stuff. Sitting atop it was a handsome bronze eagle, and I was disappointed that it wasn’t a flying unicorn as the The Book of Mormon song led me to believe heavily populated the city.

About midway on the course, we started up a seemingly long incline. After running downhill for the previous sixish miles, it may as well have been Mt. Everest. The rest of the downtown route was through commercial district streets with alphabet soup-like names, including S 900 E, E 800 S, 123 ABC OMG WTF, etc.

Ooh, the offical race photographers got a shot that includes my booty: 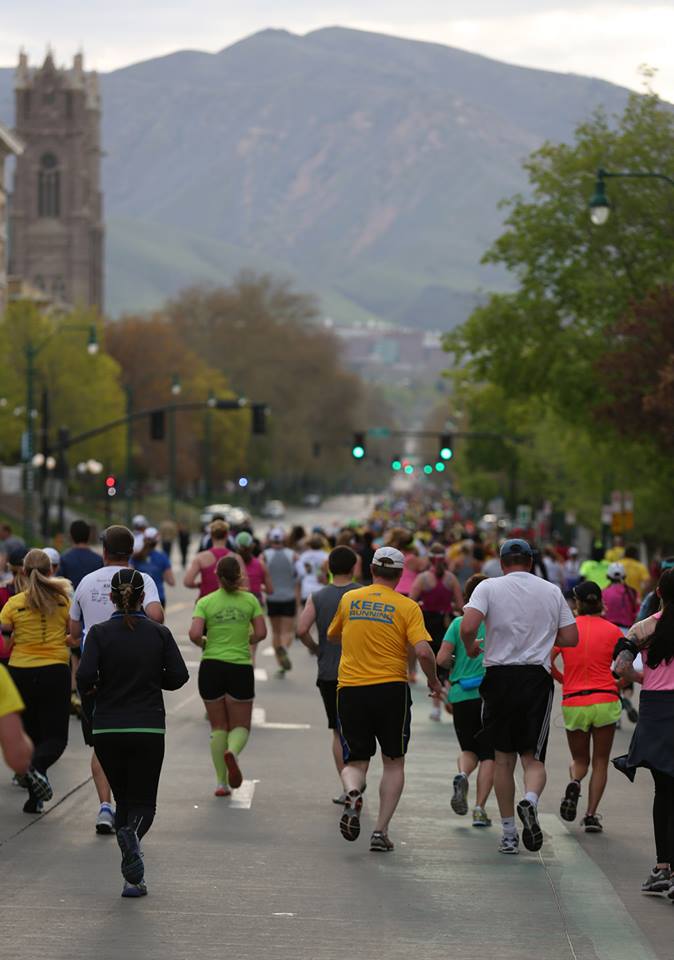 We bid adieu and good luck to the marathoners around mile 9. They promptly turned up a steep hill — glad it was them and not me! Haha, suck it!

After a quick trip around the outside of Liberty Park, we made the last few turns and headed up to the big finish in Washington Square. State #5 of my running journey was now complete! I eagerly accepted the finisher’s medal, which had a fun spinny center medallion. Spin, spin, spin. 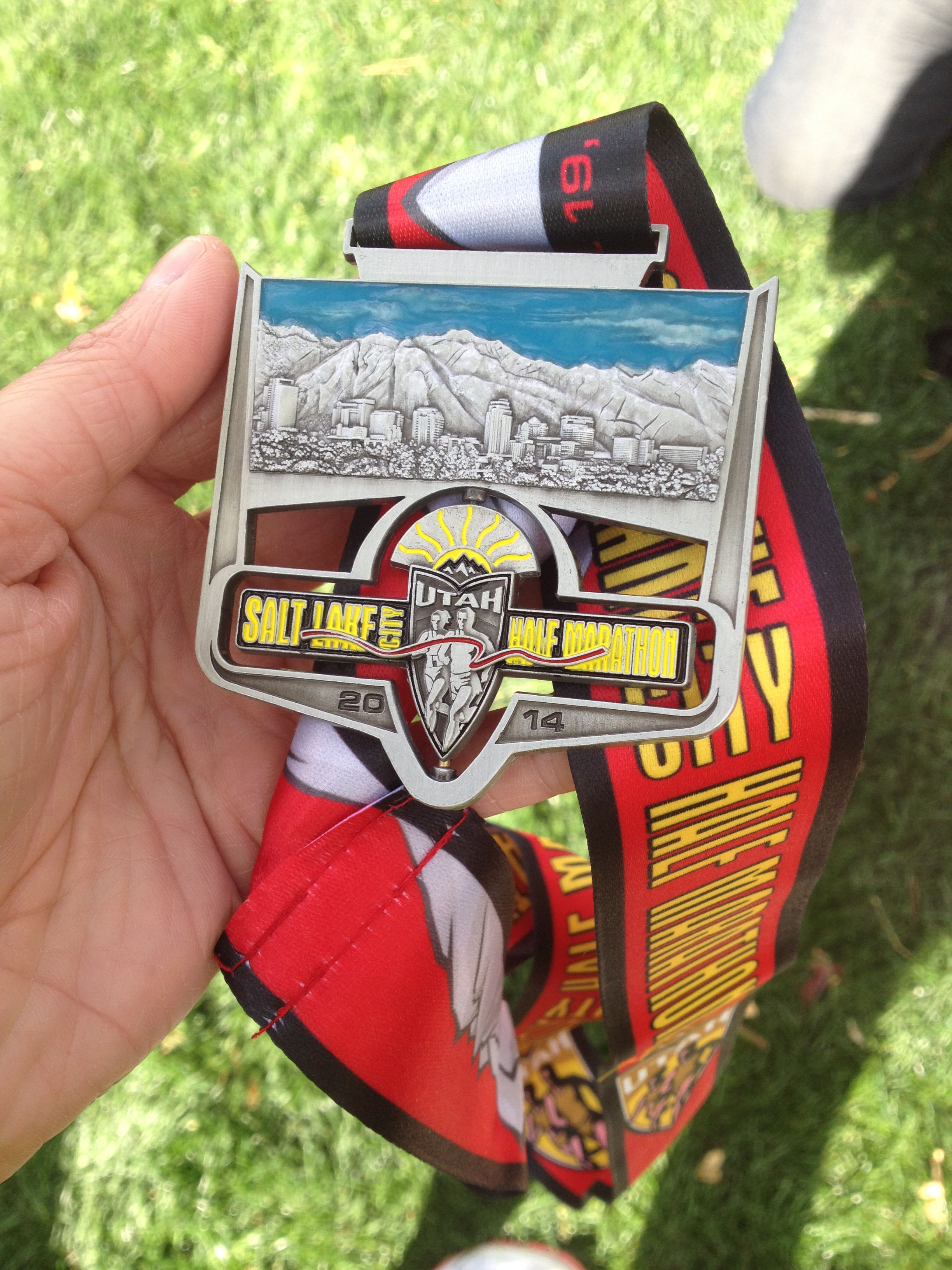 After finding Cara, we ventured off for — what else? — a post-race taco and beer-filled lunch, because that’s how we do. But first, a celebratory chest bump! 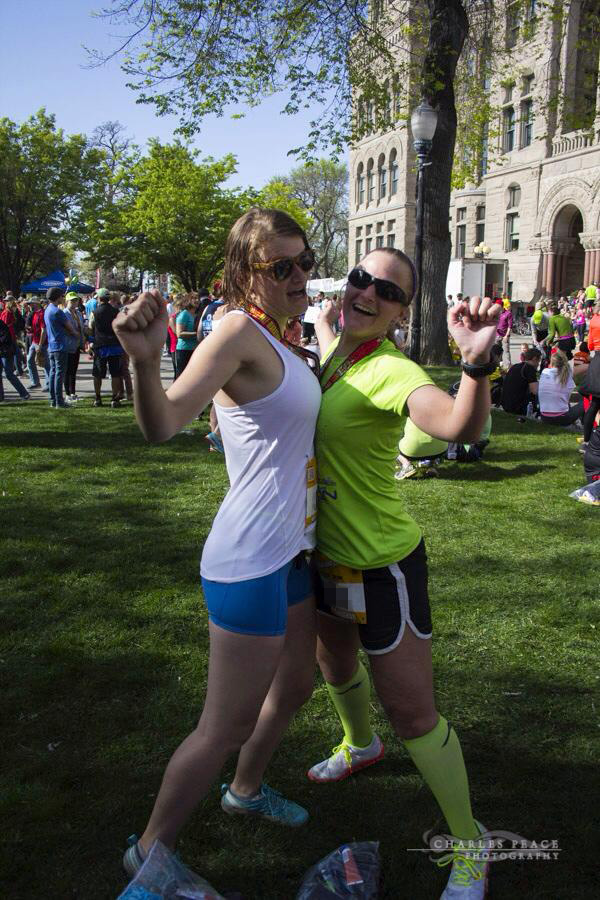 A couple hours later, Laura earned herself a shiny new marathon PR! We cheers’d her with whiskey at a dive bar, her natural habitat. 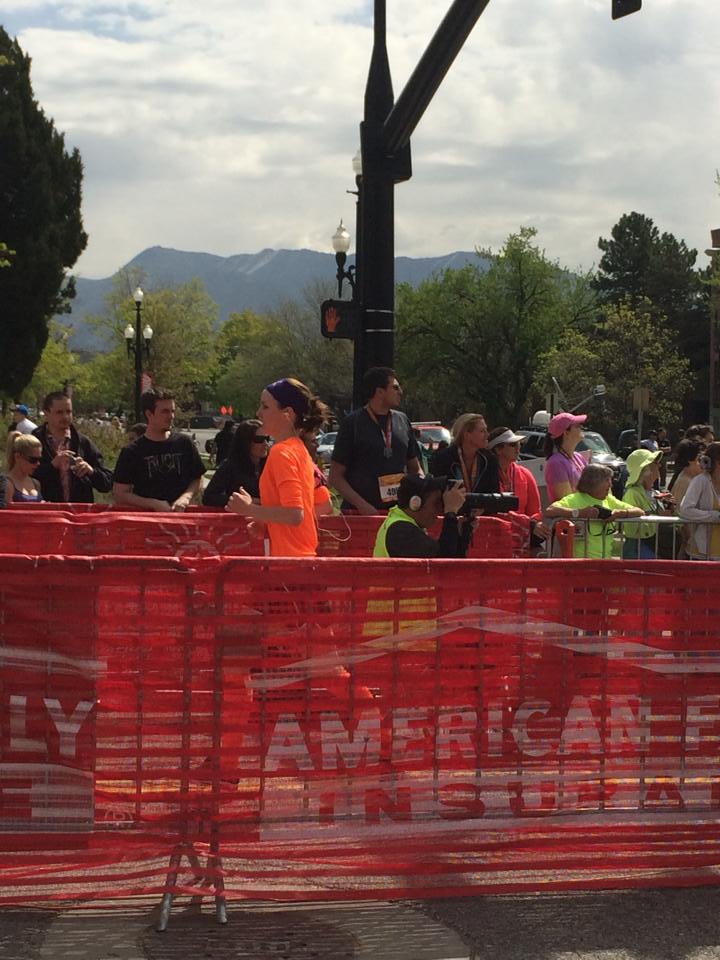 Thanks for a lovely visit, Sal Tlay Ka Siti! I’m confident that you’ll correct your errors and show me some gold-thatched roofs and flying unicorns when I return.