Typically, I put some kind of thought into planning my out-of-state running adventures. It’s a careful, time-honed process in which I Google the shit out of big races, browse race websites top to bottom, and read runner reviews while I sit on the couch with my cat and consume sugary snacks. I’ll weigh the usual factors like travel costs and logistics, race amenities, and what the host city has to offer (bonus points for historical landmarks or fun attractions). And sorry, but if your website and medal are fugly, I’ll probably skip your race because I can be a bit of a design snob. Hmm, though I did make an exception for California’s Emerald Bay Half Marathon and its comic sans-infested design…but I digress.

So that’s how it usually goes down, with a little planning and research. But… I have also been known to register for races on pure impulse. This is one of those times.

My windburn was still an ouchy-fresh reminder from my Wisconsin race when my phone lit up with a text from my fabulous friend T — you may remember her from my California race shenanigans. She let me know about a half marathon on the Nevada side of Lake Tahoe that was happening just a month away.

Hmm. Well, I had my eye on the Las Vegas Rock ‘n’ Roll race for Nevada (because running the Vegas Strip at night amongst its garishly bedazzling lights sounded uniquely fun), but an impromptu visit to see my friend also sounded fun. I was a little travel-weary, though, so I wasn’t ready to commit. But since she knows me so well, she sweetened the deal by telling me about nearby Reno’s Blues & Brews Festival that same day, “just in case you didn’t just run enough and need more beer.”

Before I let my brain have a chance to mull it over, I had completed the registration process and was officially signed up. I’d be spending another long weekend out west with my friend and offered barely any resistance. Oh, Lake Tahoe, you sly temptress, you got me again.

The Adventures of Sir Hot Pants and Side Boob

T’s boyfriend — let’s call him Sir Hot Pants — was also registered to run the Rock Tahoe half. He and I boarded the happy yellow school bus in the morning (wut, school buses have seatbelts now?!) that shuttled us the start line at Spooner Summit. We’d start around 7,000 ft elevation and drop about 800 ft as we made our merry way along Lake Tahoe’s eastern shore to the grand finish line in Stateline, Nevada. Most of this point-to-point course was downhill, and my weak, asthmatic, sea-level lungs were pleased with this news.

There had been some warm, toasty summer days that week during my visit, but we had a nice, cool, and sunshiny morning for race day. Other runners bundled up in their sweatpants and jackets, but I knew I’d be pleasingly comfy in just a t-shirt and shorts during the run. As the shrieky airhorn went off at 8 a.m., we began our descent down Highway 50, where we’d spend the next 10 miles. Normally, running 10 miles on a highway sounds less-than-exciting, but this particular highway runs along the beautifully pristine Lake Tahoe and against a mountain backdrop.

In other words, things sure don’t suck when this is your view: 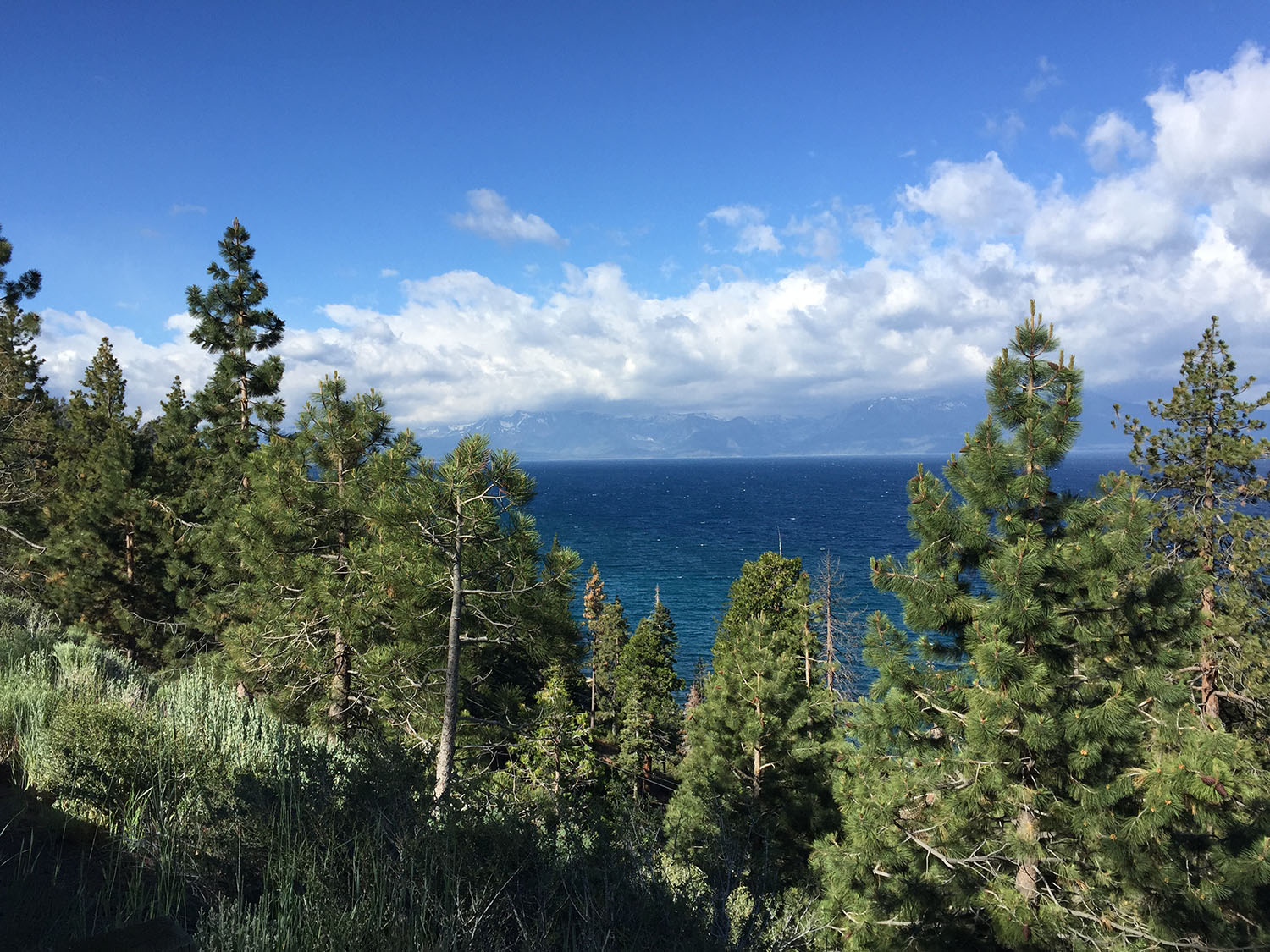 Nearly every twist and turn on the highway seemed to yield another great photo op, which was great except for the few people who’d stop dead in their tracks to take photos of Lake Tahoe. LAAAKE! ME STOP AND TAKE PHOTO! I mean, I totally get it, the views are beyond breathtaking. But please offer some warning to your fellow runners or step off to the side so you don’t get run over. I don’t want to be the one responsible for the shoe prints on the back of your cute racerback tank if I can’t get out of the way in time. To further complicate things, there were lots of construction cones, barrels, and signs dotting our view along the highway, which led to alternating wide and narrow running lanes. Much of the time this wasn’t an issue except during the aforementioned screeching-halt scenarios.

But again, things don’t suck when you have those lovely mountain views: 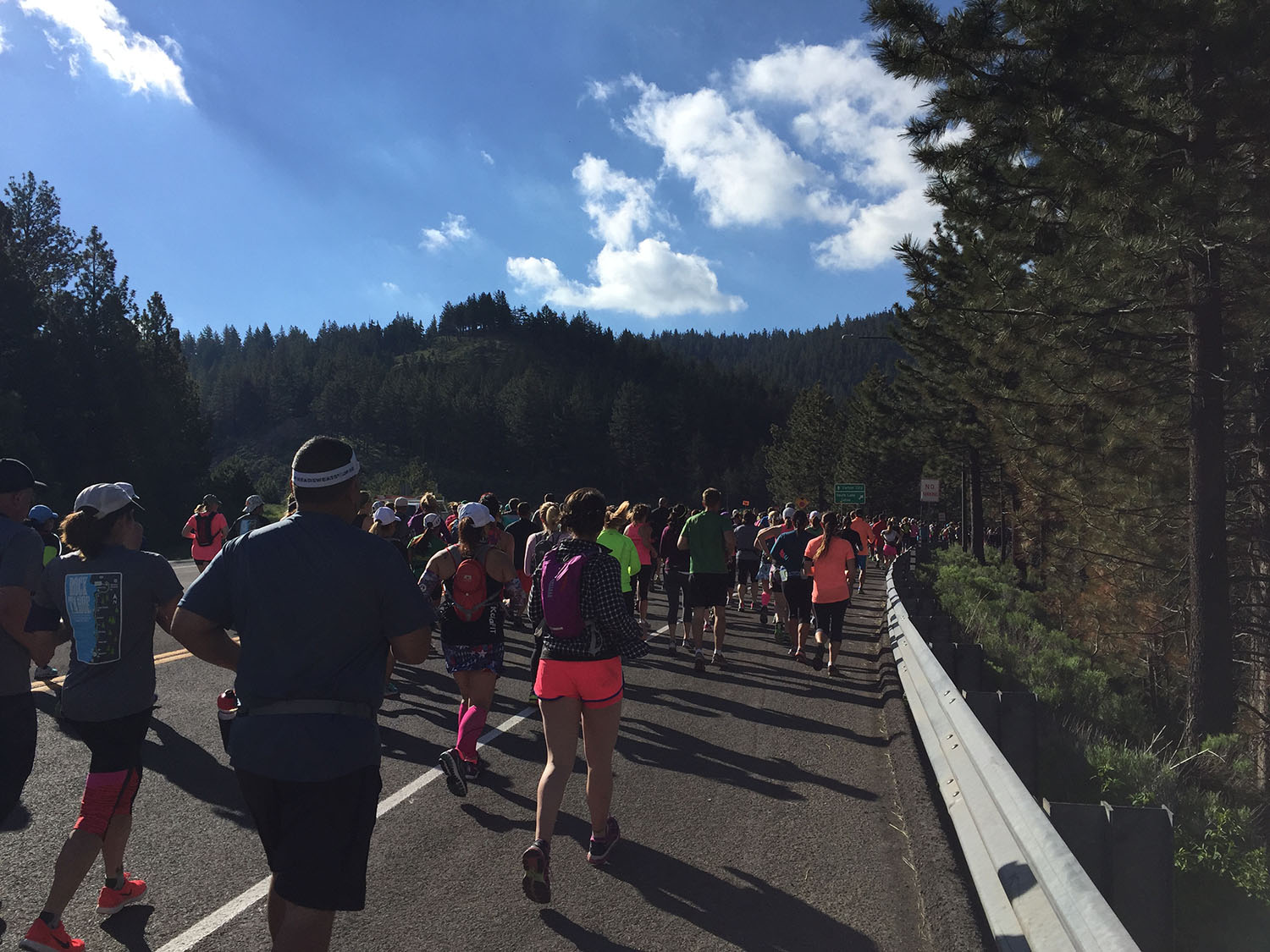 Around the midway point, we approached Cave Rock. Yes, a cave! Through a rock! There were also loads of construction barrels around this point, but a friendly construction crew guided us through the spooky tunnel and away from the oncoming vehicles. My childhood memories of watching Scooby-Doo had led me to believe that every cave was filled with bats and vampires, though I did not see any on my trip through this one. 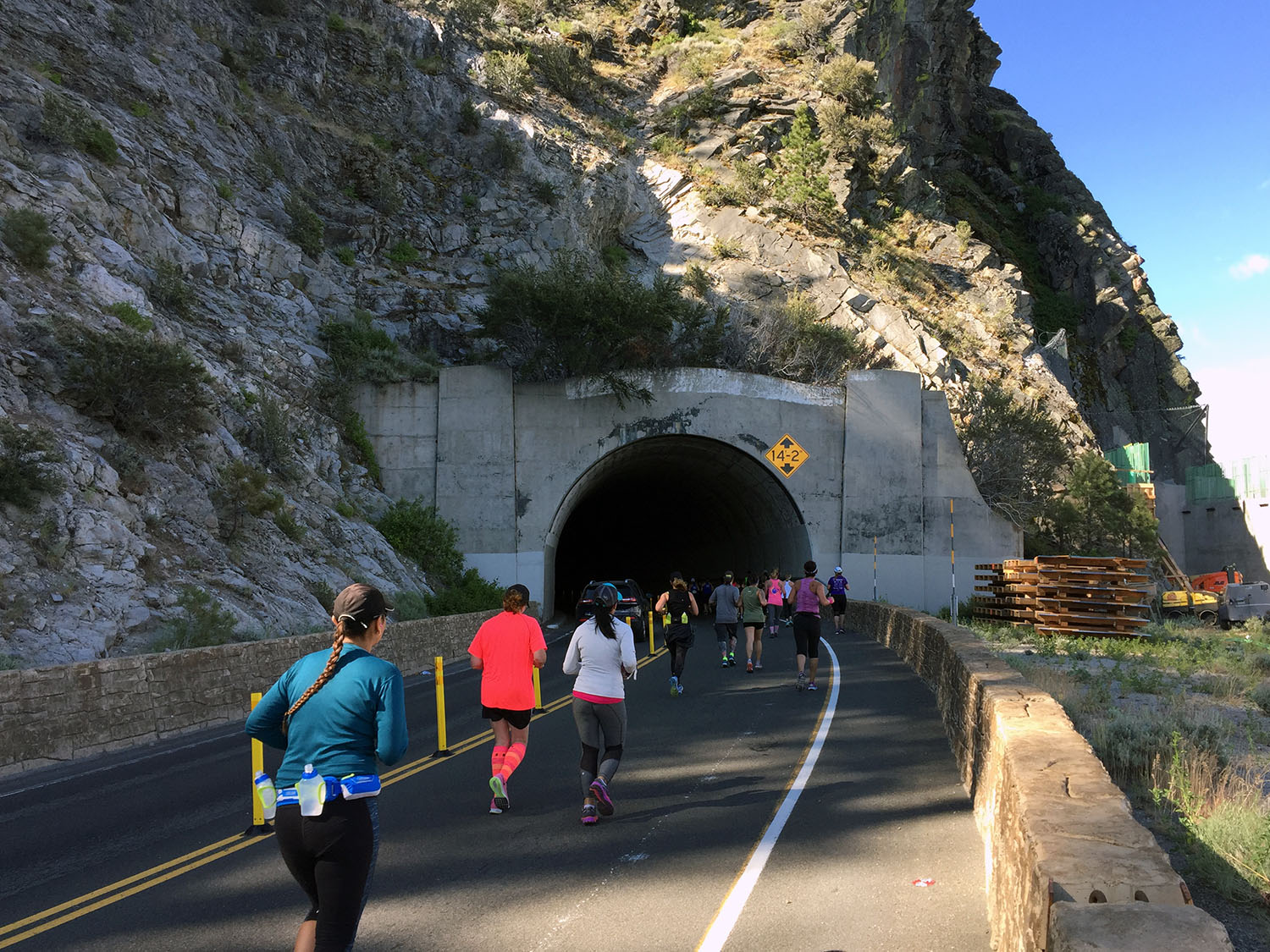 When you emerge from the tunnel, you’re greeted with another spectacular lake view and prime photo op. My photo doesn’t do it justice. 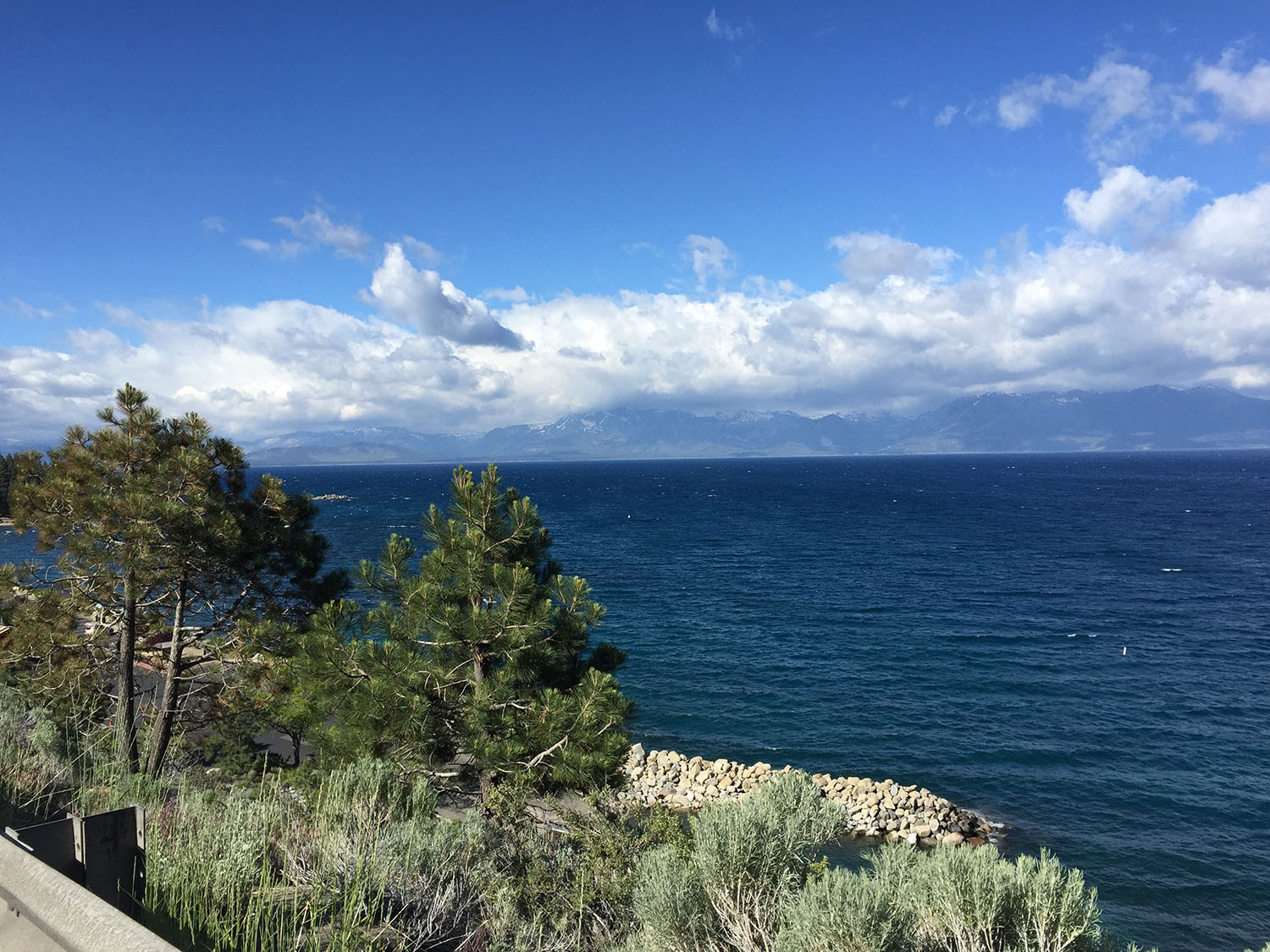 And not much further down stood a giant abominable snowman from Rudolph the Red-Nosed Reindeer fame on the course for no clear reason but for seemingly all the right ones. Bumble can be useful and promote hashtag! 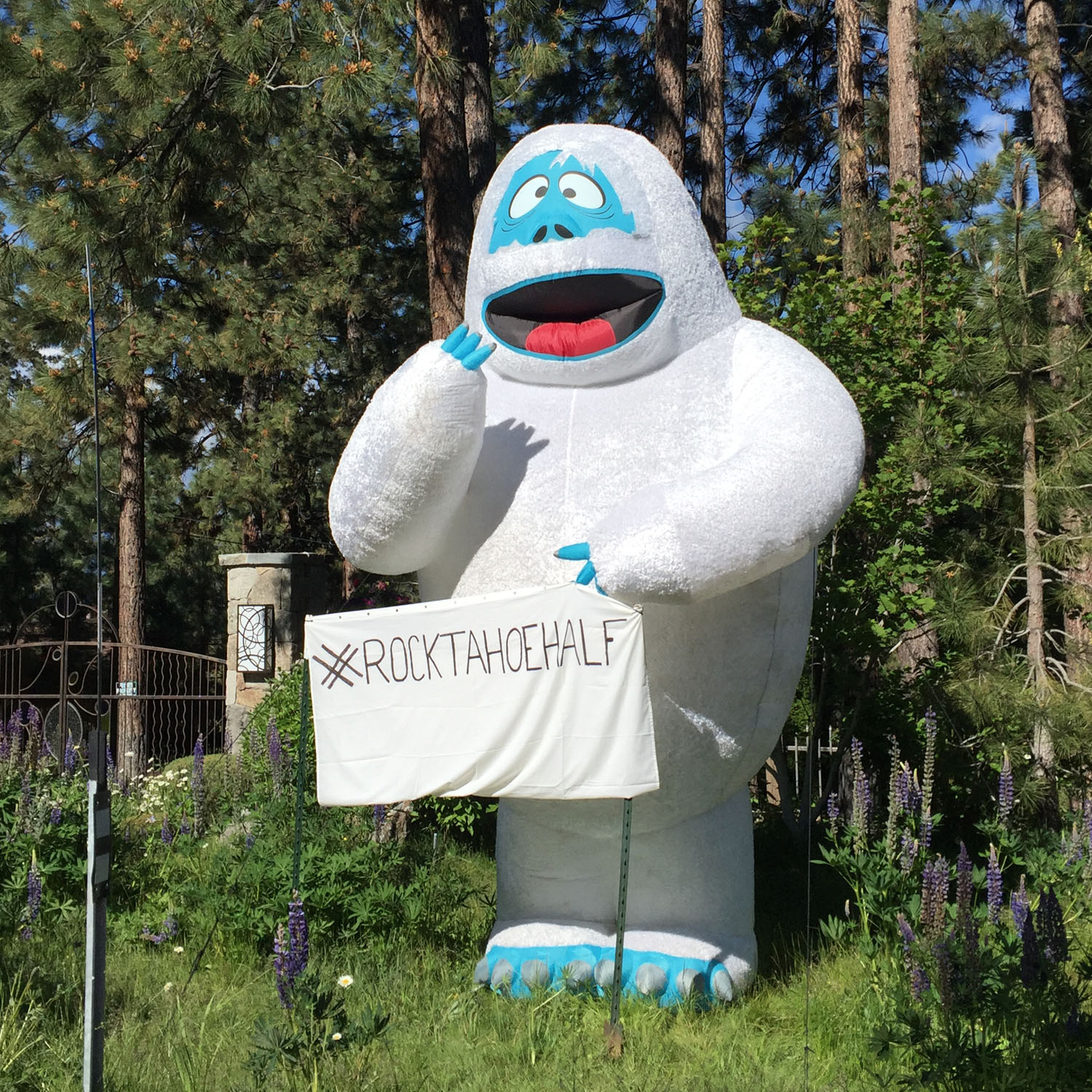 I have to say that the aid stations throughout the course were some of the most impressive I’ve ever seen. They were chock full of enthusiastic volunteers, joyous activity, and most importantly, snacks. Licorice, Swedish feesh, pretzels, oranges, and bananas were just a few of the offerings. The first aid station offered watermelon cubes with toothpicks in them for fancy little running hors d’oeuvres, mile 9 had champagne, and another was pumping out Right Said Fred’s “I’m Too Sexy.” The pre-race emails had promised some “surprises,” and I secretly hoped it’d be that David Beckham was at an aid station with puppies. But all these snacks and fun were just as good, too.

I had a very concerning moment when I spit on the side of the road and noticed it was bright red. Whaaat, why is my spit all red?! WHY AM I BLEEDING FROM MY MOU—oh wait, I just ate Red Vines and Swedish feesh at an aid station. Carry on.

After all those miles descending down the mountains, we hit some rolling hills, including a slow, curving one that seemed to last many moons. With just 5k to go, we veered off the highway and onto a paved bike path. Here, we went through Round Hill Pines, Nevada Beach, and Rabe Meadow while being subjected to more hideous views: 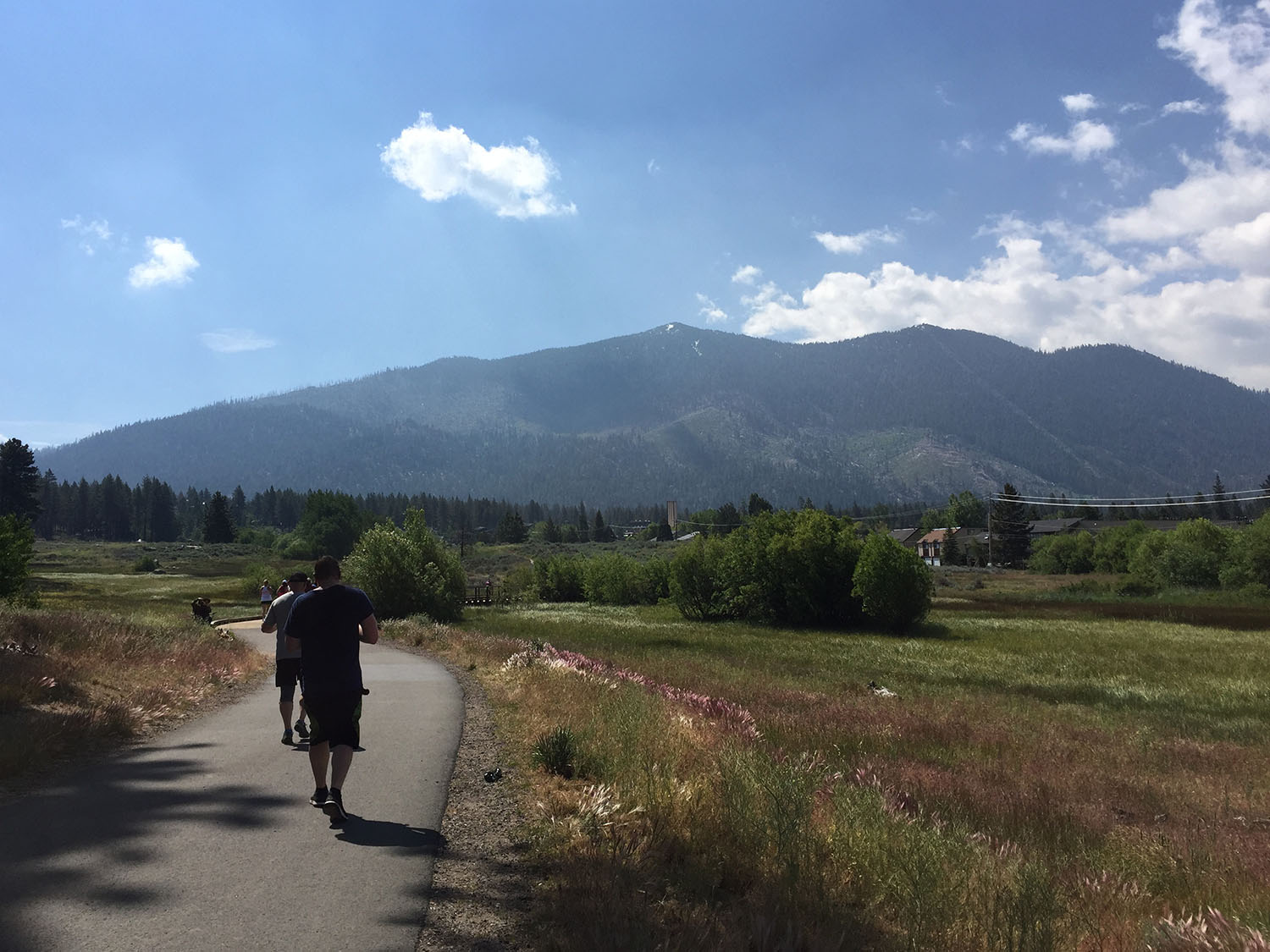 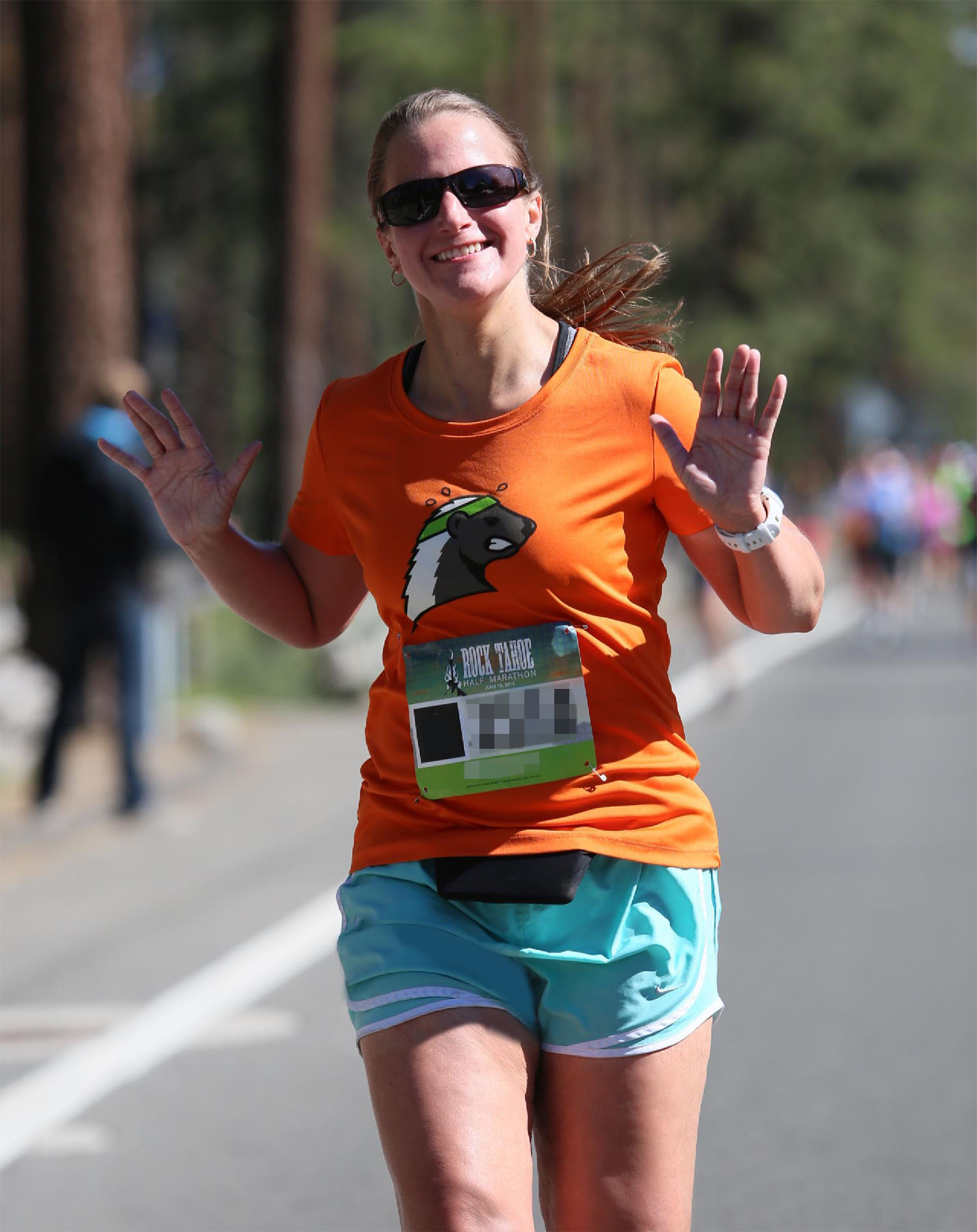 Just before the finish, we returned to the highway for one last stretch. I rounded the corner toward the finish line in the Hard Rock Casino parking lot. I saw T and Sir Hot Pants waiting for me as I boogied across the finish line in front of the casino’s unnecessarily large guitar statue. After the obligatory celebratory chest-bumps with my friends, I found a can of Sierra Nevada Torpedo thrust into my hand. That is now officially the most immediate post-race beer I’ve ever had. Wait, and the beer is unlimited? Tahoe, I like your style.

To date, this is the largest medal I’ve ever received. SO VERY METAL! (And SO MEDAL!): 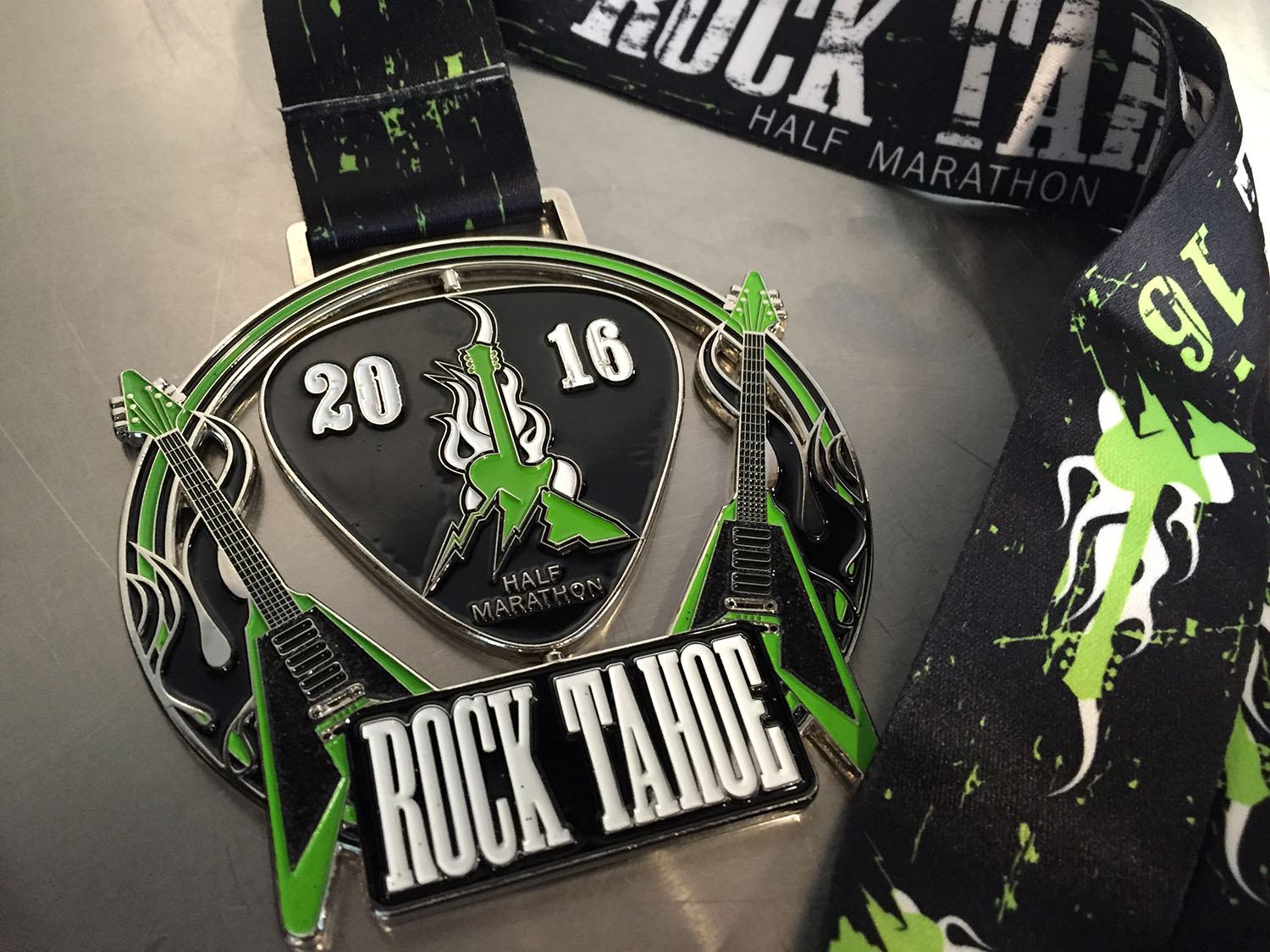 Sir Hot Pants and I decided to get some official finisher photos. The photographer suggested a silly pose with of Sir Hot Pants holding me. So I hopped into his arms to get into position. We both realized at that moment that he was grabbing my boob, but we had already committed to the pose. No looking back now. 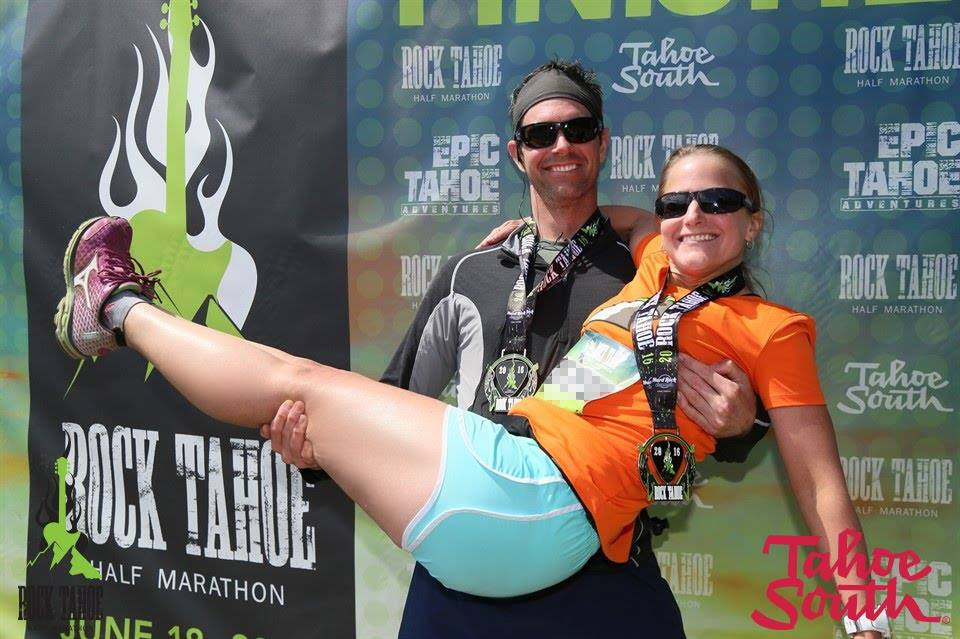 It was time to head to the street party at Reno’s Brews and Blues Festival. First, though, we grabbed post-race breakfast at the cute Mom and Pops Diner in Carson City en route to Reno. Had I gone from running to drinking to more drinking would not have been pretty. Big thanks to my friend T for being our designated driver, since Sir Hot Pants and I were flying high from race endorphins and unlimited IPAs.

Look at the size of these “sample pours.” T was right: Reno doesn’t mess around. We also got to see Everclear perform at the festival, which made my inner 90’s child oh so very happy.

To cap the fun weekend, we went tubing down the Truckee River the following day. In Michigan, “tubing” and “floating” are pretty much interchangeable and typify a lazy, carefree event. So imagine my surprise when I hear a growing roar of water while floating along the river, and T casually drops, “Oh, we’re just going to go over a small dam.” Wait, what do you mean a small dam?!

Okay, so it ended up being not that bad, but I was still quite unprepared for the river drama. Nonetheless, I rocked it, just like I ROCKED TAHOE!